A downloadable game for Windows, macOS, and Linux

Taiga Woods is an action RPG where your Grandpa writes you a letter telling you to come to his shack in the woods and pick up a present. But beware! There are monsters lurking about... Can you make it to Grandpa alive? Make sure to pack your sword, shield, and bow!

The way this game works is that you have three basic stats: ATK, DEF, and SPD. They work in a Rock-Paper-Scissors cycle. When you get attacked by a monster, your stats shift so that you are always at a disadvantage. You also swap out your weapon.

You must navigate the labyrinth-like forest to locate your Grandpa's shack. Defeat the "boss" to get your gift and unlock New Game+.

This game was translated into several languages, including English, French, German, and the New Game+ language. We ran out of time so the menu option to cycle through languages doesn't work, but we'll fix it in the next day or so.

All code and assets, including models, animations, textures, and sounds were made during Ludum Dare. Because we were short on time, some of the assets never left "place holder" status. Oh well! :D

Thank you for playing our game! I hope you enjoy playing it as much as we enjoyed making it! Leave a comment below letting is know your thoughts!

1.0.1 hotfix: I hope nobody noticed that 1.0.1 made you invincible with double dodge speed. 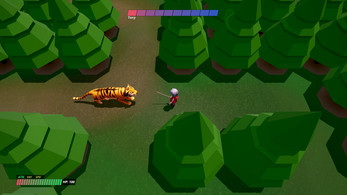